Former Interior Secretary Ryan Zinke — who has ridden off into the revolving-door sunset — had a lot of bad ideas and policies.

He thumbed his nose at sovereign tribal nations by shrinking Bears Ears National Monument; he decimated rules to cut methane emissions from the oil and gas industry; he hung the imperiled sage grouse out to dry; he leased out thousands of acres of public land for oil and gas development, with little regard to the cultural and ecological resources at stake. Meanwhile, he squandered Americans’ tax money on furniture and vacations.

But amongst all this wrecking of our public lands, Zinke did have one sensible proposal that is poised to be realized in his absence: Moving the Bureau of Land Management headquarters out of Washington, D.C., and into the West, amid the vast acreage that it oversees. It’s a smart idea, and one that ultimately will benefit the region and its public lands.

It’s reasonable to assume, then, that the BLM move is being orchestrated at the behest of the extractive industries, based on the belief that it will tilt the agency in their favor. For example, if the BLM set up shop in Grand Junction, which traditionally has been dependent upon mining and drilling, then the officials at that agency would have an interest in facilitating drilling and mining to economically benefit their community. Meanwhile, by placing the agency in the West, it would give more influence to those politicians who see extraction as the highest use of any and all public land. Some critics even believe that the move is being pushed by the likes of the Koch brothers and the far-right American Legislative Exchange Council as a first step towards mass privatization of public land.

So you may wonder how any rational person could possibly support such a notion, unless they were under the influence of Utah Republican Sen. Mike Lee’s mind-altering Jell-O. Here’s the answer (and it has nothing to do with Utah’s official snack food): I’m not worried about Westerners getting more control over the BLM, because I’m pretty damned sure most Westerners are not ideologically predisposed to lay waste to our public lands.

If moving the BLM to the West gives the likes of Rep. Rob Bishop, a Utah Republican who is hostile to the notion of public lands, more control, then it will do the same for sane politicians, such as Democratic Senators Martin Heinrich and Tom Udall from New Mexico or Rep. Raul Grijalva from Arizona. If sagebrush rebels get more influence, so will regional environmental groups that don’t have the cash to base people in Washington, D.C. Westerners who are alarmed by the de facto privatization of public lands known as oil and gas leasing can protest not just at their state BLM office, but at the national office as well.

And if relocated BLM officials see how drilling benefits the community’s economy, they’ll also get a firsthand look at how that same drilling can be detrimental to public health and quality of life — and therefore the economy. Grand Junction, one of the top candidates to house the relocated HQ, has been shifting slowly toward an amenities economy ever since the early-1980s oil-shale bust rippled through the community. The Colorado city is banking on its good health care, a decent climate, and access to public lands for recreation to draw new businesses and residents. Unfettered oil and gas development on those same public lands would hamper these efforts.

Meanwhile, the 300 well-paying, relatively stable jobs that come with the office would support the city’s move away from an extraction-based economy. That, in turn, could very well shift the political hue in a place where hostility towards federal land managers is prevalent. It’s a lot tougher to hate government bureaucrats when they live next door, and when their agency is injecting a bunch of cash into the local economy.

I’d prefer to see the office moved to a more progressive and diverse city, such as Albuquerque, Santa Fe, or Tucson. But New Mexico’s strong shift to the left in the most recent elections knocked it out of contention, and Tucson is not centrally located enough. Salt Lake City and Denver have also been mentioned as top candidates, but Denver’s high housing costs surely will count against it.

Wherever it ends up, moving BLM HQ will render one of the Sagebrush Rebellion’s favorite rhetorical memes: The insistence that “their” backyards — i.e. our public lands — are being controlled by an absentee landlord based on the other side of the nation. Now it looks like the “landlord” is going to live among its “tenants.” And I say, “Go West, BLM!” 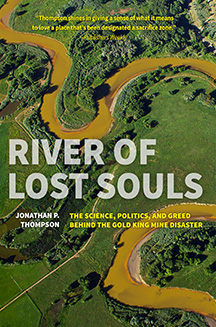 Jonathan P. Thompson is a contributing editor at High Country News and the author of Colorado Book Award finalist River of Lost Souls: The Science, Politics, and Greed Behind the Gold King Mine Disaster.

Get a copy of River of Lost Souls.