I’m about to do something that may be a bit unconventional, unorthodox — maybe even uncouth: promoting a novel before it has a publisher or even an agent. Why unorthodox? Because it seems as if there’s an unwritten rule declaring that you shouldn’t even talk publicly about the book you are writing until you sign on the dotted line; that the book doesn’t even really exist until you’ve got a contract.

And yet, I’m pretty sure this thing does exist. How else does one explain this big pile of words, not to mention the blood, tears, and coffee that I’ve shed trying to assemble them into some coherent form? And how could I have contracted hyperhidrosis from the novel’s flawed protagonist if said protagonist was merely a figment of my imagination (Oh, wait, that’s right, he is)?

So, before I get infected with even more of Malcolm Brautigan’s self-diagnosed maladies, here goes.

Behind the Slickrock Curtain is a novel — literary fiction, with a pinch of post-modern mystery and environmental thriller thrown in. It’s a novel of place, a road trip book, a tome for our post-truth age, and a tragicomic romp through the Anthropocene, replete with searing, irreverent, abrasive, satirical, and occasionally sad commentary and insight.

The narrative unfolds in the spectacular sacrifice zone known as the Four Corners Country, taking readers from a winter’s night on Cedar Mesa some twenty years ago, to near-future Tucson, Winslow, Farmington, and Durango, before returning to Utah. Most of the action takes place within the original (pre-shrinkage) boundaries of Bears Ears National Monument. 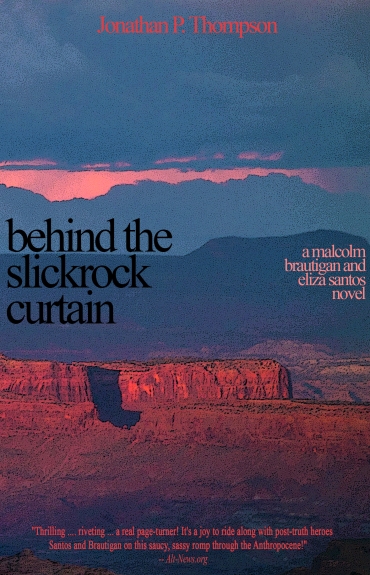 Malcolm Brautigan is one of the protagonists — if someone as flawed as he is can be a protagonist. He once was an environmental journalist, writing byzantine wonk-fests for the Tucson Tribune. Then Brautigan’s marriage fell apart, and, under pressure from the Tribune‘s corporate owners, he penned a widely-read, but partly fabricated article exposing a sleazy bit of collusion between a local environmental group and a “green” developer of a “sustainable” desert community of 10,000 people. Not a good idea, particularly since the developer was dating Malcolm’s soon-to-be-ex-wife at the time. Malcolm lost his job and, after slaving away for a “content mill,” found a new path: Producing fake news. He is now the editor-in-chief of Alt-News.org. He manages to pay his rent and stay stocked up with Bombay Sapphire gin, his chosen salve for a chafed conscience.

Eliza Santos is Malcolm’s partner in protagonism. She is an artist, creating sculpture/dioramas — entire worlds — from books, clay, and found objects. As of late she’s been far more productive artistically than her husband, Peter Simons, despite the fact that she’s working full-time as a librarian to pay the family bills. To her, Malcolm is as much an irritant as he is a hero of this tale. She’s witty, brash, and principled. Her major flaw: She spends an inordinate amount of time devising harebrained business schemes with her friend Ann in hopes of making enough cash to live a truly Bohemian lifestyle lolling around in the sunshine and eating sardines in a small village in Portugal.

Peter Simons is Eliza’s husband, Malcolm’s oldest friend, and a moderately successful painter who has abandoned that medium to focus on far less lucrative environmental/land/performance art (e.g. a pyrotechnic dance performance on a uranium tailings depository, Tang-orange breed of corn planted to commemorate the Gold King Mine spill, etc.). His latest project is in this vein, but is also a mystery. We only know that it is inspired by his belief that the Gold King Mine spill was the ultimate piece of environmental art. He’s obsessed with originality in his work, possibly due to a dark secret from his past. A couple of weeks before the Summer Solstice he heads out into southern Utah to do research for his art installation. He doesn’t return.

Plot: Eliza and Malcolm set off for the canyons of San Juan County, Utah, in search of the missing Peter, their only clues a series of mysterious files found on Peter’s laptop relating to tar sands, adventure resorts, and an ethically suspect Secretary of Interior. They are drawn into a dangerous dance with petroleum engineers, the ghost of a uranium tycoon, energy developers, corrupt politicians, adventure capitalists — and a “monster” and its “daughters.” Along the way the book delves into journalism in the post-truth era, art, beauty, environmental protection, the deadly legacy left by the nuclear age, and the power of friendship — all with a healthy dollop of sexual and intellectual tension and humor.

Kenneth Etcitty — Longtime advocate for land and people of the Four Corners Country, now the Sheriff of San Juan County, Utah. Afflicted with rural-Sheriff syndrome, a deep fatigue resulting from being the top law officer in counties with very few people and lots and lots of public land in which visitors can get lost, fall and hurt themselves, or commit crimes.

Bill Stevens — Former San Juan County commissioner and local mouthpiece for the Sagebrush Rebel crowd. He’s accustomed to getting what he wants, and when he doesn’t, he feels he is being persecuted. Commonly refers to public lands officers and other people who don’t share his ideologies as “tyrants.”

Albert Fallon — the current Interior Secretary of the United States, who is intent on destroying the very agencies he oversees. Sycophant. Corrupt. Beholden to oil and uranium companies. Strong supporter of kleptocracy, plutocracy, and petrocracy. Lap dog to oligarchs. Fancies himself a Sagebrush Rebel.

Adriana Santos-Simons — 17-year-old. Handful. Smasher of the patriarchy. Got suspended from school for making a sculpture of Ted Cruz — constructed entirely out of … well, you’ll have to read the book to find out.

Frank Hildebrandt — Utah prospector who made it big off of the uranium boom of the 1950s and helped put Moab on the map, uranium-wise. Died under suspicious circumstances in the 1960s while he was trying to develop a high-grade uranium deposit that he claimed would change history — and perhaps even warp time.

What the fake critics are saying:

“Thrilling …. riveting … a real page-turner! It’s a joy to ride along with post-truth heroes Santos and Brautigan on this saucy, sassy romp through the Anthropocene!”

“It’s okay, I guess, but what’s up with that pumpjack sex scene? Is that what they mean by post-modern?”

— Chad, some guy on the street

“If you combined Carl Hiaasen, Lydia Millet, Chuck Bowden, and … Wait? It’s kind of perverse to do that, isn’t it? And do you have their consent? Anyway, maybe if you twisted all of their writings together you’d end up with something kind of like Behind the Slickrock Curtain. Or not.”

“First there was the War on Christmas. And now Behind the Slickrock Curtain?!? What’s this world coming to?”

Suffering from a bout of culture and displacement shock after moving from rural Greece to Paris. The Greek and Bulgarian strays (dogs, not me) are quite the sensation here.
Hot dogs.
Sailing Circus!
Back in Hellas 🇬🇷
Who needs some stinking #vanlife when you’ve got #silverbulletlife?!
A July day in the Four Corners Country.