It was like a sucker punch to the gut last week when the State of Utah sold off 800 acres of land in southern Utah to the highest bidders, the hardest blow being the loss of a 380-acre chunk of Comb Ridge near Bluff. On October 18, and for decades before that, it was public land, a place where locals and visitors could roam freely. Then it wasn’t, and likely never will be again.

The Comb Ridge parcel lies just north of Highway 163, and stretches from the crest of what some Navajo call the “backbone of the world” down toward Butler Wash. The Hole-in-the-Rock trail went through here, prompting the Hole-in-the-Rock foundation to nominate it for auction in the first place. The old, abandoned blacktop highway cuts through the parcel, too, both defiling and adding an intriguing feature to the slickrock.

It’s one of the easiest places to access Comb Ridge from the highway, so it gets a lot of use — people camp, hike and just climb up to the ridge to sit quietly and take in the contorted and spectacular landscape all around. I’ve even used a little nook on the crest of the ridge as a sort of backcountry office because of the view and the solitude and because of the 3G cell signal that the town of Bluff lacks. It lies within the proposed Bears Ears National Monument, and probably would have been swapped out for federal land elsewhere under a monument declaration. Now, if the monument is designated, it will simply be a private inholding. 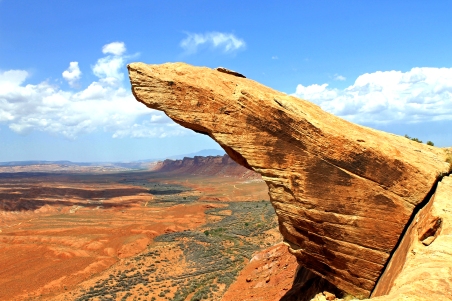 Cow spine on the sold parcel.

Old can in the old road, on or adjacent to the Comb Ridge parcel.

When water and stone meet, on the sold Comb Ridge parcel.

Prickly Pear in bloom on the parcel that was sold.

Crest of Comb Ridge on the parcel that was sold.

View up Comb Ridge from the parcel that was sold.

After it was nominated for sale, local conservationists scrambled to raise enough money to buy it themselves, but Lyman Family Farm, Inc. beat them and the Hole-in-the-Rock Foundation to it with a $500,000 bid. Don’t expect to see fields of corn and alfalfa growing there, though, as Lyman Family Farm doesn’t appear to do much farming at all.

The company is registered to Joseph L. Hunt at the South Jordan, Utah, address of Air Medical Resource Group, of which Hunt is the president. Hunt is from Blanding, Utah, pioneer stock, and one of AMRG’s subsidiaries, Eagle Air Med, got its start in Blanding when a local doctor, Jon Hunt, started flying his plane to medical emergencies on the nearby Navajo Nation. Hunt registered Lyman Family Farm, purportedly as a vegetable and melon growing operation, in June 2014, just weeks after San Juan County Commissioner Phil Lyman led an ATV protest ride down Recapture Canyon. It’s not clear whether the two are connected, nor why Hunt went with the “Lyman” name.

In 2015, Lyman Family Farm bought three parcels of state land just outside of Bryce Canyon National Park for a total of $292,000. In addition to the Comb Ridge acreage, Lyman Family Farm also bought two other parcels near national parks: One in San Juan County north of Monticello and about 20 miles east of Canyonlands National Park, and one — at a price of $1.74 million — near Zion National Park. Hunt has been evasive about his plans for any of the parcels.

Meanwhile, Phil Lyman and other locals who have fought against Bears Ears and other public land preservation efforts have been notably silent, thus revealing one of the paradoxes of the land transfer/Sagebrush Rebel movement. The principal motivation behind the movement is a desire for more local control over, and access to, the vast tracts of federal land in their backyards. They believe that they should have a bigger say in how that land is managed, and they generally believe that the best way to realize this is to transfer federal land into state hands. The 15,000 residents of San Juan County will, in theory, have far more sway over state bureaucrats and politicians than they do over those in Washington, D.C..

Of course, it doesn’t always work out that way. In almost every Western state, state lands are seen primarily as revenue generators for schools and other services. So when it comes to managing them, money speaks a heck of a lot louder than local voices. A state will always lease out land to extraction or grazing if the opportunity exists. Just look at New Mexico, where state lands are crammed full with oil and gas infrastructure that brings in a lot of cash — at least when oil and gas prices are high. By prioritizing revenue generation above all else, the state takes the control over the land away from the people, and puts it into the hands of the corporations. So much for local control.

If there’s no oil or gas or coal or gravel on the land, then the state can generate much needed revenue by simply selling it off to the highest bidder, a la the Comb Ridge parcel. Arizona’s growth machine has been fueled by developers buying up huge chunks of state land at a bargain, and then slathering them with massive residential “communities.” Once the land is private, then local control — and usually local access — is tossed out the window.

One of San Juan County residents’ biggest fears regarding a possible Bears Ears National Monument is that it would take away local control and access to the lands that they’ve long roamed on freely. I understand this fear. I grew up in a town surrounded by open space, where my friends and I rode bikes, camped out, hiked, had sword battles. And I remember how sick it made me feel when the fences went up around those places and the machinery and houses came in — what we had long intuitively understood to be public land, our land, was actually private. And believe me, no one asked us for our opinion on what happened on that land.

Federal land management often leaves a lot to be desired. The feds, too, want to fill up the coffers with cash, and so they, too, can be beholden to corporate interests. But in the end it belongs to every one of us, and we each have a voice in how it’s managed, even if it may be a small one. Once land is private, we lose that voice.

Suffering from a bout of culture and displacement shock after moving from rural Greece to Paris. The Greek and Bulgarian strays (dogs, not me) are quite the sensation here.
Hot dogs.
Sailing Circus!
Back in Hellas 🇬🇷
Who needs some stinking #vanlife when you’ve got #silverbulletlife?!
A July day in the Four Corners Country.